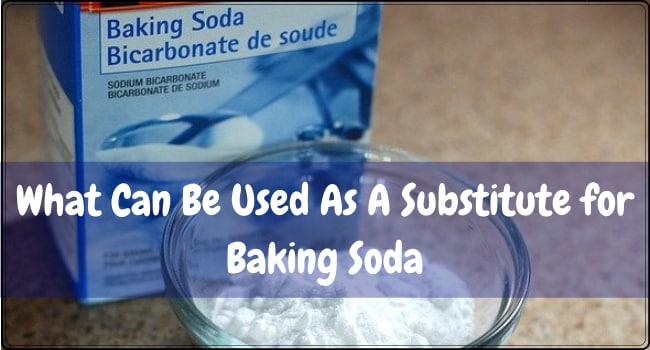 If someone tells you to come with sodium bicarbonate, they mean baking soda. Some of its uses include mouthwash, treats heartburn, deodorant, and air freshener, among other uses. Just like its name suggests, you need it when baking. When cooking pancakes, muffins, cookies, or even bread, you require this raising agent.

So, how does it work? Note that it's alkaline. Baking soda will release carbon dioxide gas once it gets into contact with an acidic ingredient. The gas allows your baked goods to expand and give it a fluffy texture.

Imagine coming to the house with a massive craving for muffins. You open your cardboard, alas! There is no baking soda. Do you have to knock your neighbor's door and borrow some? Maybe she is anti-social and will ruin your appetite. So, use a substitute.

The chemical composition of the baking soda makes it tricky to substitute. That doesn't mean that you can't replace it. Check the tricks below to help you to replace your baking soda with other ingredients successfully.

Here are several baking soda substitutes that you can consider.

Among the ingredients of baking powder includes baking soda plus cream of tartar. That makes baking powder a perfect substitute for the baking soda. Their physical appearance, name, and even functions may confuse you.

Due to the presence of cream tartar, baking powder is more salty and acidic. To protect your dish from becoming more acidic, reduce acidic ingredients and salt.

For armature cooks, this method can mess you if you are not careful. Note that some of the self-raising flour ingredients include all-purpose flour plus baking powder and salt. As explained above, baking soda doesn't require acidic ingredients for leavening baking goods. To reduce the acidic level, use non-acidic ingredients. Since each cup of the self-rising flour has a quarter spoon of salt, you can avoid adding more salt to your delicacy.

Another traditional leavening agent is the ammonium carbonate. Just like baking soda, it requires to interact with acidic ingredients plus heat to form carbon dioxide. It also releases ammonium gas. After baking with it, the goods will have distinct crispiness. Substitute it with baking soda in the ratio of 1:1.

For cookies and other goods with light and thin texture, it's the best substitute. Don't use it if your end product will be thick and crump, such as muffins and cakes. It leaves behind an unpleasant smell.

What if you don't have a baking soda or any other substitute? For simple baking, use egg whites as a substitute to the baking soda. You need to beat the egg white well before adding them to your batter. Also, measure the egg white and remove equivalent liquid from your ingredients.

Pancake lovers enjoy eating a fluffy and moist pancake. To achieve the result, use the club soda. Before adding the club soda to your batter, you need to remove an equal amount of liquid from your liquid ingredients. Some people prefer to use club soda instead of water or milk in their recipe. They claim that it adds extra lightness and also volume.

Don't open the soda bottle until you are ready to use it. If you open and leave it for some time, the carbon dioxide supposed to leaven your goods will sneak to the air. If you desire to have an end product that is light and fluffy, avoid substituting baking soda with the club soda. To avoid disappointment, buy baking soda.

What if you don't have baking soda, baking powder, or even all the other substitutes above? Check if you have some sour milk. Are you surprised that sour milk can replace baking soda? Note that, immediately, sour milk goes through the acidification process, the pH level reduces. Once you include it in your recipe, it will have leavening effects similar to those of the baking soda.

Note that due to the baking soda's chemical composition, the end products may not taste similar to those of a baking soda. So, if possible, stick to the recipe and use all the recommended ingredients to achieve the right results.

It's essential to stick to the given recipe. But the lack of baking soda should not prevent you from baking your goods. If you are using a product such as Potassium bicarbonate, you can include some salt if you have no health issues. When using baking powder, note that it's not as strong as the baking soda. So for every spoon of a baking soda, replace it with three spoons of the baking powder. Not all substitutes work for all types of baking. For instance, avoid using baker's ammonium to products such as cakes and muffins. Use egg whites only if your baking is not complex. Avoid opening a club soda container before you are ready to use it. If you do, carbon dioxide intended to help in leavening will sneak out to the air.