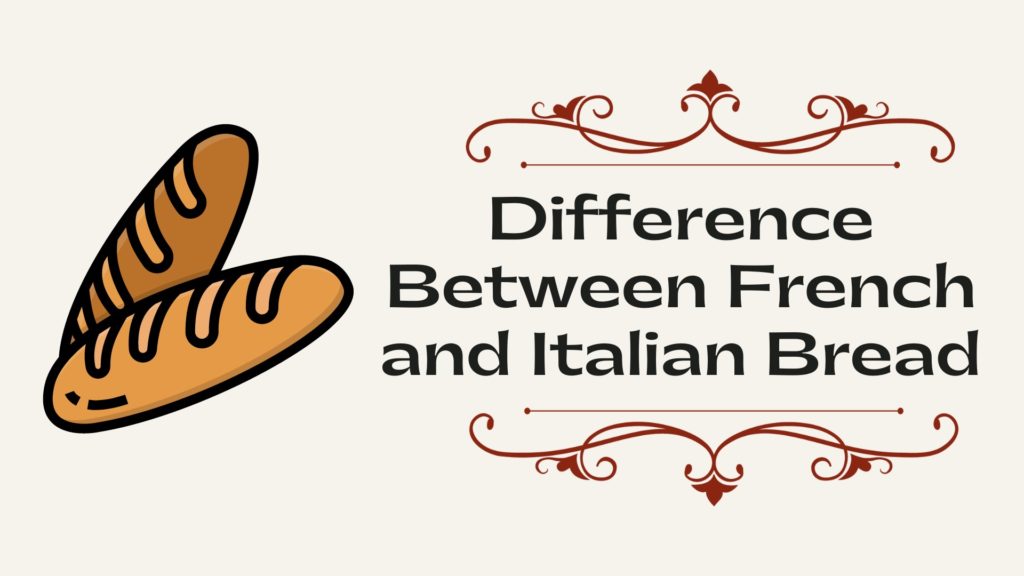 Every country has its own culture and heritage. It can be easily seen in their likes and dislikes. The differences between two countries can be noticed in their attire and even in their cuisine as well. It will be quite amusing if you come to know that even the bread of two different countries symbolizes their heritage and culture. Yes, that’s true. France and Italy the two European countries produce their own kind of bread with different taste, flavour, shape, and size.

Though the people of these two countries equally prefer bread as their prime food and they cannot imagine a day without bread, but still, their approach differs in making and yes in serving too. Both of the countries are not only having earned fame in delicious bread making but also have a high demand around the world.

Now it is time for you to know little more about bread prepared in France and Italy and where they are different from each other. Have a look.

The Types of French Bread

There are different types of bread you may find in French menu and all of them are equally popular not only in France but also in other countries.

When you think about French bread the first name that instantly comes to your mind is the baguette. It is a long thin crusty loaf which is commonly called as ‘the French stick’. You may find this popular sandwich loaf from short length to a meter long.

The other name of this flat and round shaped sourdough loaf is ‘country bread’ as it is generally coming from the countrysides of France. Made with white wheat and rye this bread is commonly used in most of the part of the country.

These kinds of the loaf are longer and thinner than a baguette and have an appearance of string. This is easy to munch on without adding anything as it is already covered with sesame seeds and cheese.

The Types of Italian Bread

Being a hugely diverse country, most of the provinces of Italy have developed their own cuisines. Therefore you may find varieties of loaves here. Some of them are-

You may also refer to it as ‘white pizza’ as it is pizza type bread dough. As it is topped with olive oil, salts, and herbs you may have it without adding anything.

This is a hard-baked loaf made with semolina flour is very popular for mainly two reasons. One, its bright yellow color and the second, it may stay fresh for a week or more without using a freezer.

This is a thick crusted loaf including tomato sauces baked on the top. It is preferred by most for its unique style and taste.

​Difference Between French and Italian Bread

The shape and size of bread is the first thing that may draw your attraction towards it, especially when you’re eating it. Most significantly the shape and size of the bread of the two countries-France and Italy symbolize their heritage and culture. Therefore it is easy to tell the differences between French and Italian bread from their appearance. You may find some loaves small and round while some are flat and wide. For example, most of the French loaves like baguette baked in long and thin shape with rounded edges. On the other hand, the Italian bread, like focaccia is flat and round, much like a pizza base.

Most of the ingredients are the same of these two kinds of bread but still, there are few things that make difference between French and Italian bread. In French bread, oil or fat is not added but simply made with water, flour, salt, and yeast. On the other hand, Italian bread is free to add milk, olive oil and sugar so that it tastes sweeter than other bread.

French bread like brioche is known for its sweetness and it is served for breakfast. Though they don’t use sugar, but the enrichments including extra amounts of unsalted butter, and eggs that go into the dough make the loaves sweeter in taste. On the other hand, most of the Italian bread like Carasau are known for savory taste. Pork and cheese or tomato and eggs all the savory ingredients are the reason behind its savory taste. Besides, salt, olive oil, or herbs also added for a savory flavor.

The differences in the baking process of these two countries provide their bread different flavor and texture. The French mostly use convection deck oven for baking their bread. This makes the loaf softer and less chewy. On the other hand, Italian bread is baked in a flat stone oven of a wood fire. This is how the pizza is made. This provides their bread a smoky flavor and a unique aroma. But both of them need the same temperature for baking.

As you may find bread in every French and Italian meal, it seems that they are served for the same purpose. But that’s not true. This is one more difference between the two countries is how they are used to serve the bread and what they are served with. The French are commonly used bread as a starter with butter and soups at the dinner, even they take bread in breakfast meals. On the other hand, Italians prefer to serve bread as a supplement with pasta and many other main courses. Sometimes Italians eat bread to absorb the flavor of olive oils and as the thick sauces at a rich meal.

Finally, it is time for curtain down of this discussion where I have given all the necessary information from the best of my knowledge about the differences between French and Italian loaves. I am sure this will help you to get a clear idea about these two and you’ll able to select the best one for yourselves in different times for different purposes. Good luck!

John DiBella
John DiBella is a graduate of The Culinary Institute of America, a cooking enthuthiast and a writer. When he’s not writing blogs about home kitchenware, he enjoys hiking, camping, sailing and cooking.